You're Thinking about Conflict All Wrong


Is there a better way to think about conflict;
a model which can free us from our fear of conflict?

Conflict is a part of everyday life.  In our individual struggles to survive, grow, connect, and control the world around us, we often find that someone or something is in our way or making it harder to reach our goals.  It is a natural, animal instinct to envision these conflicts as a simple dichotomy: me v. you, us v. them, plaintiff v. defendant, the hero v. the villain, etc.  We see conflict most simply as a tug of war between two positions, two competing interests.  But what if we're thinking about conflict all wrong.

Picturing conflict as a one-dimensional struggle between two forces allows us to frame the conflict in an easy to understand way.  If you're wrong, then I'm right.  If what I want is good, then what you want is bad.  It is a tug of war between two positions, and there are only four options for resolution: you win, I win, we compromise (we both lose something), or we end in a stalemate.

However, when we see this conflict dynamic in a two-dimensional space it can help us see that there may be additional options for resolution. 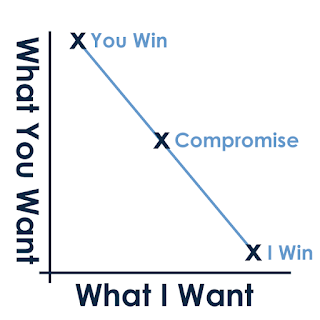 Negotiating between two positions, what you want v. what I want, assumes that the resolution can only be located somewhere on the compromise line depicted above.  In this graphic representation, we limit ourselves to a solution that exists on the line between "You Win" and "I Win".  Those limitations also limit our process options, the choices of how we will resolve the conflict.  If you won't give in or compromise then I must either use force to change your mind or seek an outside decision maker.  I either given up my agency or force you to give up yours.

These limited options both for process and resolution, explain why conflict often makes people feel hopeless and powerless, like they are losing control, or it turns them into bullies.  The good news, is that we don't have to resort to these methods when we expand our view of conflict beyond one dimension.

In a two-dimensional model of conflict there are significantly more options both for resolution and problem-solving.  There are numerous options below the compromise line in which we both lose more than if we compromised.  This is often the result in litigation because the emotional and financial cost of the fight reduces the potential result by those costs.  A fight is not a zero sum game.

However, there are also numerous options above the line. 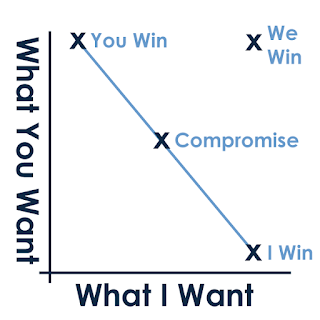 There are options where we both get what we want when we view conflict in two dimensions instead of one.  A two-dimensional conflict resolution model looks at the possibility that conflict is more like an Olympic race than a tug-of-war.

Most of the racers in the Olympics know they aren't going to beat the favorite, the Usain Bolt or Michael Phelps.  So why do they show up, then?  They still show up to the race because they are racing for something else.  They may be racing against their own time.  The may be racing to represent their pride in their country. 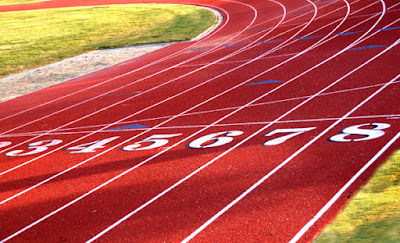 They crossed the finish line just like the "winner of the race",
but they won something different.

We often assume that everyone in the race has the same goal, and because of that assumption, we see one winner and the rest as losers.  This is an oversimplification.  We know that most people don't have a chance of beating Usain Bolt in a footrace, and at the same time we may still be successful people.  We have different goals.  Even Usain Bolt will "lose" his share of races to others, and that doesn't change what he has accomplished in the past.

The result of conflict can be a success for everyone involved when we look at conflict differently, when we look beyond the tug of war and see that our goals may overlap in some ways and diverge in others.  Even this two-dimensional model is limiting because it assumes that our own interests are linear.  As complicated beings we not only have multiple interests, some of our own interests can be in conflict. 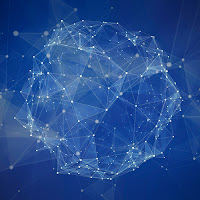 The most accurate way to view conflict may actually be an imperfect sphere of intersecting lines of interest.  Viewing conflict in this way helps us see that every conflict has many, many possible resolutions, and is rooted in many potential competing interests.  The skills and techniques used by  mediators, and other conflict resolution professionals, aim to help people in conflict step back and see the forest through the trees.  When people see their conflict differently, as a three-dimensional problem they can solve together, then the process of finding resolution can be as complex and as beautiful as this sphere.

The most revolutionary transformation of conflict comes when we let go of the rope between us and see each other not as enemies, but as joint observers of the problem.  Leaving behind a one-dimensional view of conflict, frees us all to be more creative problem solvers.  A two or three-dimensional view of conflict also frees us from the need to use force, or give up control, in order to resolve the conflict.  Instead when we are joint problem solvers, conflict is a challenge that we can tackle together, and the process itself leads to a greater understanding of each other's core interests.

In conflict between people that have an ongoing relationship, like families, neighbors and co-workers, this process of understanding can actually help resolve (and maybe even prevent) future conflicts as well.  It may sound corny at first, but this broader model of conflict resolution can help us recognize the potential beauty in both the process and resolution of a challenge.  It can help us see the opportunity in conflict and take away the fear that makes us avoid conflict.

Facing conflict (both inside ourselves and with others) helps us better understand our place in the world and grow our selves and our relationships.‬  Let us not fear conflict anymore, but face it with a better understanding of it's inherent beauty, complexity, and it's relation to our identity.