Should Alimony Recipients be Able to Save for Retirement? 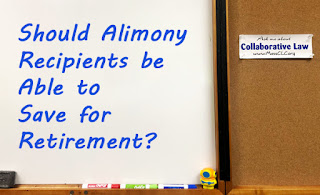 In Massachusetts, Alimony is defined by the Alimony Reform Act of 2011 (the "Act").  We've previously explored how the Act outlines "need" and the case law that has developed around that definition: Alimony: You Get what You Need!  The question we're exploring today, is whether or not this definition of need includes saving for the future, or retirement.

Chapter 208 Section 53 of the Massachusetts General Laws states that:


"(a) In determining the appropriate form of alimony and in setting the amount and duration of support, a court shall consider: the length of the marriage; age of the parties; health of the parties; income, employment and employability of both parties, including employability through reasonable diligence and additional training, if necessary; economic and non-economic contribution of both parties to the marriage; marital lifestyle; ability of each party to maintain the marital lifestyle; lost economic opportunity as a result of the marriage; and such other factors as the court considers relevant and material." (emphasis added)

The language in bold above does seem to give some potential argument that the ability to save (if that was common in the marriage) is relevant to the question of what the recipient "needs."  Oftentimes the payor will continue to have the ability to save for retirement, so arguably having alimony payments low enough that a recipient cannot save creates a disparity.  The Young v. Young decision, explored in this post, arguably limits future saving if it wasn't part of the marital lifestyle (limiting inclusion of future increases in a payor's income), but still doesn't address this issue directly.

There is one pre-Act case (2004) that addresses this issue, and the question that remains is whether or not that case is still good law, given the new definition in the Act.  Cooper v. Cooper was an an alimony and child support mod where the appeals court felt the lower court went to far with the alimony increase stating:


"To the extent that the amount of the award relies on the judge's finding that it was made in part to 'ensur[e] future continuity of the former marital station,' it also was improper. An alimony award that exceeds current need, so as to permit accumulation of assets or savings for the future, may be appropriate only when that award is made pursuant to G. L. c. 208, § 34. 'Under G. L. c. 208, § 34, alimony and property division are interrelated. . . . Need is a major element, but obviously not the only one, in an equitable distribution of property under § 34.' Rosenberg v. Rosenberg, 33 Mass. App. Ct. 903, 904 (1992)."

While Cooper is a pre-act case, it does give a clue as to other ways to address retirement needs, besides alimony, by referencing the property division statute.  Arguably if the alimony payor has a greater ability to save for retirement than the alimony recipient may need to have a greater proportion of the existing retirement in the division of property to account for this disparity.  Of course, this is only an option when there are sufficient assets to divide at the time of the divorce, and the goal of the court is not to create financial equality between the parties indefinitely (again as demonstrated by the Young case), but rather to equitably divide the property at the time of the divorce, whatever that means.

So ultimately, the answer to this question is outstanding, and we may eventually receive additional guidance if someone takes the issue up on appeal.  In the mean-time, divorcing spouses can continue to be creative about how they argue about, and resolve, disputes relating to the equitable way to account for their needs today and in the future.  Mediation and Collaborative Law encourage spouses to expand the conversation in these types of ways and address short and long term goals, to resolve conflicts today and also prevent them from resurfacing in the future.