In Mediation, Sometimes a Number Isn't a Number 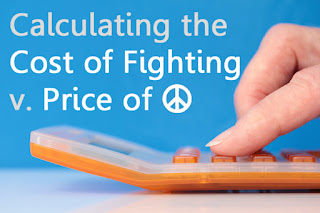 In many settlement negotiations, the two sides narrow their disagreement to a small gap in their positions, a gap so small it pales in comparison to the total amount of money being discussed.  This happens often in divorce mediation, where clients threaten to blow up a multi-million dollar divorce settlement over the last $5,000 disagreement.  Why would anyone do that?  Why would either side let everything fall apart over an amount they'll obviously spend on attorneys if they continue fighting?

Our friend and fellow mediator, David Kellem, wrote an excellent article entitled the Price of Peace where he describes asking a client stuck on the last $15,000 of a lengthy and painful negotiation from which both parties had already moved on to new relationships: "how would it feel to you if this afternoon you went home to Diane and instead of telling her how awful your wife is, you could tell her that the case is settled and that life can move forward?

David broke the cycle by helping his client see that regardless of what the final number was (within reason), the value of peace and a finalized divorce was something he had to weigh by his own standard of value.  This is a value only clients can choose, and is often overlooked because it doesn't have a legal or financial value.  Only a client can decide if the price of peace is more important to them than the cost of the fight.

Often the number that clients are left disagreeing about is not going to make or break either of them.  The remaining disagreement often stems more from a feeling of "right"; about where they are each coming from and what that number might represent to each of them.

Instead, of focusing on those feelings of loss, I encourage clients to think about that number, as much as possible, as just a number that will allow them to finalize their conflict. I ask them to recognize that regardless of where they land it's not going to make either of them whole.  Unfortunately in a divorce no-one leaves whole, but it is possible to leave having found enough peace to move on and start healing.