Bringing Home the Bacon, and Frying It: The Appeals Court Defines Economic Partnership 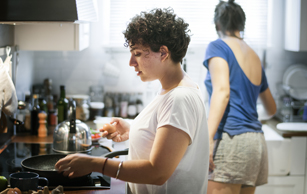 Does it make a difference for my legal rights if my spouse and I lived together before we got married?

The lawyerly answer, which I know is one most people can’t stand, is “it depends.” The Bortolotti v. Bortolotti case, a 1:28 unpublished decision that came down from the Appeals Court in April 2018, sheds some more light on this situation. The relevant statute, M.G.L. c. 208 §48, provides that the legal length of a marriage may be extended by periods of cohabitation if the parties had an “economic partnership” during these periods of cohabitation. The Bortolotti decision clarifies that “economic partnership” exists both in situations where both parties contribute income to the household, and in situations where one party may be economically dependent on the other. The decision further notes that when a judge exercises her discretion to exclude premarital assets from the marital estate, she should use a valuation of those assets at the time of the marriage.

The Appeals Court’s approach to the definition of “economic partnership” is broader than the lower court’s, and rightly takes a more broadminded approach to what this should mean. The commonsense definition of “partnership” suggests that both parties to a partnership contribute to it. But what qualifies as a “contribution” in a marriage/cohabitation partnership? The lower court seemed to only consider economic contributions in the form of one partner’s contributions of his income to the parties’ expenses during their cohabitation. Because the other partner did not contribute financially during their cohabitation, and appeared to be economically dependent on her male partner, the lower court did not believe there was a partnership.

The Appeals Court’s broader definition of “economic partnership” suggests that contribution to an economic marital partnership may involve more than simply depositing your biweekly paycheck into the joint bank account. While one party may be economically dependent on the other, she may still be considered a “partner” in an “economic partnership” that extends the legal length of the marriage for alimony purposes. The Appeals Court keeps its rationale for this broader definition of “economic partnership” grounded in rules of statutory interpretation and in case law, but the wider implications of this definition are clear and, I think, only right. Here in April 2018, we should be beyond the point where we believe that a stay-at-home wife (or husband) who is not bringing home the bacon is not contributing financially to the economic partnership of a marriage simply because she (or he) is only frying it.