By Skylark Law & Mediation, PC May 18, 2018
Today, May 18, 2018, the court announced at the MCLE Family Law Conference that a new child support guidelines worksheet will be effective as of June 15, 2018. The new worksheet is available here. While the base Guidelines themselves have not changed, the language will be updated to reflect the changes to the worksheet (the new guidelines are expected to be released on May 22, 2018).

There have been a lot of changes to support, both spousal and child support, in the last few months. While everyone is still picking over exactly what the implications of the new Tax Cuts and Jobs Act are for alimony, we wanted to take time to review the current situation under the 2017 Child Support Guidelines.  Divorcing parties and practitioners alike should be mindful of these issues, even though a new form has been issued, because any cases for which child support was set from September 15, 2017 to June 15, 2018 may now be modifiable.

The first issue involves the original worksheet Table B, multiple children calculation. This issue was first shared with us by Professor Benjamin Bailey of the Department of Communication at UMass-Amherst, and his wife Attorney Julia Rueschemeyer.

The guidelines typically assume that a parent should pay more support the more children he/she has, however the original 2017 Guidelines worksheet did not do this in all situations. When parents have a mix of children under and over age 18, the Guidelines lead to some strange and counter-intuitive results, where having fewer children could result in your paying more support. The problem is with Table B of the Child Support Guidelines Worksheet: 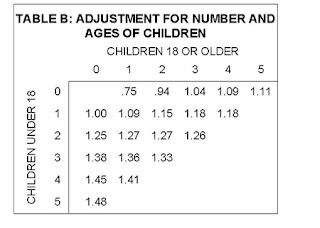 The Task Force originally responded to this alleged error in Lawyers Weekly by indicating that it recognizes that Table B produces seemingly inconsistent results in some situations, but that this was its intention for various other reasons.  Professor Benjamin Bailey proposed an alternate table that should be used instead to avoid inconsistent and counter-intuitive results, and to correctly encapsulate the intentions proposed by the Task Force.

Now that the Probate Court has issued corrections to the Child Support Guidelines the Table B issue is now resolved by having two separate calculations. These are listed in Table B and Table C in the new worksheet, separating the increase for multiple children and the decrease for any child over 18:

This resolves the inconsistency created by the original Table B, but raises three additional issues tied to the fact that this approach significantly reduces the impact of the 25% discount.

Issue 1:  Because this approach reduces the impact of the 25% discount, anyone who obtained a child support order between September 15, 2017 and June 15, 2018 may have a lower child support amount in place than the new worksheet will produce.  The difference may be small, but could lead to a need for modifications to match the new worksheet.

Issue 2:  Any parent who has a child over 18 that is also in college may want to consider whether a deviation from the worksheet amount is appropriate to take into account contributions to college expenses.  The guidelines still provide for this to be taken into account, and that issue may become more important since the impact of the discount has been lowered by this new worksheet.

Issue 3:  Finally, the Task Force may have originally intended this discount to have a bigger impact.  If that's the case, then when the task for reconvenes (likely in 2021), this could lead to a greater discount in the next Child Support revisions.