Who is a Legal Parent? Redux Edition - Partanen v. Gallagher 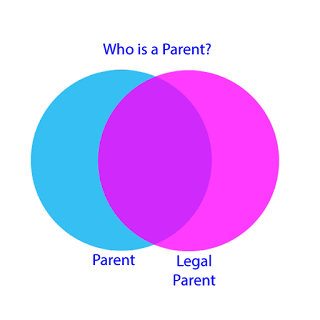 About a year ago we posted a series entitled Who is a Legal Parent? and addressed the many ways in which a parent (someone who takes care of a child) can also be considered a legal parent (someone who the court recognizes has rights and obligations relating to the care of a child).   In the Venn Diagram to the left you can see that these two categories overlap but not everyone who is a legal parent acts like a parent, and not everyone who acts like a parent is recognized as a legal parent.

Today, the Massachusetts SJC expanded the purple section of this diagram, recognizing that a non-biological parent who "jointly with the mother, received the child into their home and openly held out the child as their child" is a legal parent.  In Partanen v Gallagher the SJC read the statutory definition of paternity to include a non-biological same-sex parent.


"In addressing Partanen's claims on direct appellate review, we consider the question whether a person may establish herself as a child's presumptive parent under G. L. c. 209C, § 6 (a) (4), in the absence of a biological relationship with the child. We conclude that she may."

We review this decision below:

The court first reviewed the timeline of the relationship between Partanen and Gallagher, the two mothers in this case:

2001 - Partanen and Gallagher entered into a committed relationship.
2002 - They moved to Florida and purchased a house.
2005 - They decided to start a family; Partanen unsuccessfully underwent fertility treatment.
2007 - Gallagher underwent similar treatment and was successful and gave birth to a daughter.
2011 - Gallagher again underwent a fertility treatment and gave birth to a son.
2012 - They returned to Massachusetts together.
2013 - They separated and Partanen moved out of the family home.

From 2007 to 2013, Partanen participated in raising the children from birth, but did not formally adopt the children.  In February, 2014, Partanen filed an action seeking shared legal custody and parenting time with the children under the "de facto" parenting standard.  In October 2014 she also filed a Petition to establish legal parentage under G. L. c. 209C, § 6 (a) (4) among other laws.  The SJC did not reach her other assertions (under the reproductive technologies statute and under constitutional claims) because they found in her favor under G. L. c. 209C, § 6 (a) (4).

The trial judge dismissed the second complaint but did provide custody and parenting time to Partanen under the "de facto" parent standard, expanding the traditional "de facto" parentage case law to include legal custody and child support.  That issue is under appeal as well, but the issue of legal parentage under 209C reached the SJC first resulting in this decision.

G. L. c. 209C, § 6 (a) (4) states that "a man is presumed to be the father of a child" born out of wedlock if "he, jointly with the mother, received the child into their home and openly held out the child as their child."

Under Hunter v. Rose, the court reads all statutes as if "words of one gender may be construed to include the other gender and the neuter."  Read in gender-neutral terms G. L. c. 209C, § 6 (a) (4) includes all children who were "born to [two people] who are not married to each other" instead of its original language "born to a man and woman who are not married to each other."

Gallagher argued that, regardless of a gender-neutral reading, the provisions of G. L. c. 209C, § 6 (a) were intended only for the purpose of establishing biological parentage and are thus inapplicable to this case where this is no doubt that Partanen is not a biological parent of the children.  However, the court points out that nothing in the statute expressly requires a biological tie.

Further, the court points out that the statute's purpose is described in § 1 as providing "all '[c]hildren born to parents who are not married to each other . . . the same rights and protections of the law as all other children.' G. L. c. 209C, § 1."  Under Hunter v. Rose, if Gallagher and Partanen had been married, the children would have been presumed to have two legal parents.

The court also points out that another portion of G. L. c. 209C has already been extended beyond biological parentage, specifically under § 11 (a) if parentage is established through a written voluntary acknowledgement of parentage then even a non-biological signatory parent would be considered a legal parent with all the attendant rights and obligations.


Ultimately, the court's reading of this case (and the trial court's requirements on remand) are highly dependent on the facts of the case, and more specifically the exact nature of the relationship and decision to have children together:


"Gallagher contends also that allowing Partanen's claim to proceed intrudes on Gallagher's 'right [as] a single woman to give birth to a child into a family framework of her own choosing.' The question in this case, however, is not whether courts may impose a second parent onto a single-parent family, but whether this was, in fact, a single-parent family in the first place.  Partanen's allegation is that, from the beginning, the children had two parents, both of whom were jointly involved in the children's lives.... and  the statute at issue was enacted for the benefit of children born outside the context of marriage..."

The claims that Partanen made in her complaint regarding her involvement with the children were sufficient for the SJC to establish a claim under the "paternity" statute.  Now the decision returns to the trial court where Partanen must prove those claims.  Given her previous establishment of parenting rights under the "de facto" parenting standard it seems likely that she will be able to meet this burden of proof.

Given that this case expands the reading of the "paternity" statute beyond the traditional reading, this case may have far reaching impact on the rights and obligations of non-biological parents who formally may have had very limited rights under the "de facto" standard.  This will create some confusion as different fact patterns are presented to the court, but in the long run should mean the recognition of more parents as "legal parents", something which the SJC clearly believes is in the best interest of children born to unmarried parents.