Things a Judge Can't Do, but You Can! - Part 1: Dispute Resolution Provisions 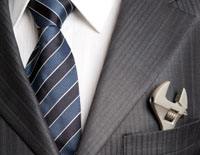 A number of recent appellate decisions in Massachusetts have addressed the boundaries of what Probate and Family Court trial judges have the power to do.  Their powers are limited by statute, case law and the Massachusetts Constitution, and sometimes judges exceed those powers by crafting solutions that test the boundaries of their authority.

These limitations, however, highlight one of the reasons that more and more people are seeking out-of-court methods of resolving their family conflict.  Agreements reached between the parties can include provisions that the judges don't otherwise have the authority to order.   In this four part blog series we will explore some of the important areas that an Agreement can address but the trial court is limited in addressing.  These are just some of  the most recent examples, and not intended to be an exhaustive list of all the ways that Agreements are better than letting a Judge decide your fate.

Part 1: Future Dispute Resolution - Do you want to return to court first or as a last resort?

The Massachusetts Appeals Court has ruled in Ventrice v. Ventrice, that a Probate and Family Court Judge violated the Massachusetts Constitution by ordering parties in a divorce Judgment to engage in out-of-court mediation prior to filing any further action in the Probate and Family Court.   While it is typical to include these types of dispute resolution clauses in Agreements, the appellate court found that Article 11 of the Declaration of Rights of the Massachusetts Constitution guarantees free access to the courts.

According to the Appeals Court this provision is "an unconstitutional burden to the parties because it delays an objecting party's right to file a complaint in our courts, and also because it forces the parties to bear a likely costly expense for court ordered mediation services."  The case was remanded on this issue and the Appeals Court directed that the "the judge may in her discretion refer the parties to court-appointed dispute resolution in accordance with the Uniform Rules on Dispute Resolution, but may not condition the right of either party to petition the court on participation in such a process." This essentially means that the trial judge can tell the parties that they should consider mediation, but can't force them to participate in it, and can't force them to pay for it.

However, this is a typical provision in many negotiated Agreements.  Especially when parties have chosen to use an alternative dispute resolution process like mediation or collaborative law in the first place, they will often want to commit to returning to that process before going to court.  The Ventrice decision does not preclude those types of provisions from being enforceable if the parties agree to them.

From a practical perspective, if a party really refuses to participate in good faith and just shows up for a mediation meeting they may fulfill the language of a dispute resolution provision, even if they don't fulfill the spirit.  In most instances, though, if someone is spending their time to meet with a mediator, they will at least give settlement a try, and that's all that a dispute resolution provision requires.  It doesn't require people to agree, it just requires them to try to agree.

This may seem like common sense to those who would rather save their money and time rather than spend endless hours fighting in court, but unfortunately our statutes and case law don't always lead to common-sense solutions.  The court in Ventrice has highlighted one of the weaknesses of the judicial system, and the good news is that nothing in this decision takes away your power to put a common sense dispute resolution process in an Agreement.

Next up: Self-Executing Adjustments - Do you want to return to court for changes you can anticipate?