Can a person reporting a Restraining Order violation be sued if they're wrong? 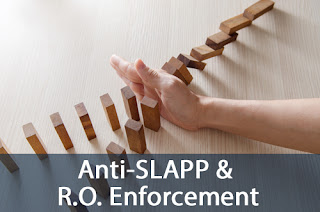 Though our work is primarily focused on family mediation, a recent Anti-SLAPP case caught our attention. The Anti-SLAPP statute protects those “petitioning” a government entity from retaliatory civil lawsuits.  The recent case of St. Germain vs. O’Gara references this statute, in the context of a reported allegation of violating a restraining order.

St. Germain, the defendant, reported O’Gara to the police for violating a permanent abuse prevention order. She reported that St. Germain mailed documents to her which violated the protection order, but it turns out were properly filed court documents.  O’Gara was arrested for perceived violation of the order but later released due to lack of evidence against him.

The trial court denied St. Germain’s motion under the Anti-SLAPP statute to dismiss O’Gara’s complaint against her.  However, the Appeals Court found that the trial court failed to apply the two-part test appropriately.  The two part test requires first that the moving party show that the suit against her relates only to the petitioning activity, and if proven then the burden shifts to the opposing party to show "by a preponderance of the evidence, that ‘(1) the moving party's exercise of its right to petition was devoid of any reasonable factual support or any arguable basis in law and (2) the moving party's acts caused actual injury to the responding party.’ "

While the trial court indicated that there wasn’t enough factual evidence to rule on the Motion in favor of St. Germain, the Appeals Court disagreed.  The Appeals Court believed that St. Germain met the first part of the test because her report to the police was “petitioning activity” under the statute:


“When a person reports suspected criminal activity to the police, she is engaging in constitutionally-based petitioning activity for purposes of G. L. c. 231, § 59H.”

While there were multiple counts to O’Gara’s complaint, they all stemmed from this petitioning activity and therefore the first part of the test was met.  The second part of the test required O’Gara to “establish by a preponderance of the evidence that ‘no reasonable person could conclude’ that St. Germain's report to the police was supported either in fact or in law.”

Here is where St. Germain believes she had a reasonable case to reach out to the police:


But O’Gara countered that he did contact the court and that St. Germain’s conversation with the police was malicious.  In the end, even if the Appeals Court agreed that her conduct was malicious (which they don’t seem to), the Court concluded that the intent wouldn’t matter under the Anti-SLAPP statute, so long as any reasonable person could agree that her petitioning activity had a basis in fact or law.

It was therefore determined that St. Germain could have been reasonable in believing the mailed documents were in violation of the restraining order.  While the facts later resulted in O’Gara’s prosecution being dismissed, that doesn’t overcome the burden required to proceed with his claims against St. Germain.  In other words, the Appeals Court believed that this is exactly the type of petitioning activity the Anti-SLAPP statute is intended to protect.

St. Germain was protected by the Anti-SLAPP statute and the case was remanded for an order allowing her Special Motion to Dismiss and to address the issue of attorney’s fees.

By Kelsey & Trask, P.C. February 09, 2011
In Massachusetts the statutory waiting period after a Judgment of Divorce and before the divorce becomes final (or absolute) is called the Nisi period. After a divorce case settles or goes to trial, a Judgment of Divorce Nisi will issue and it will become Absolute after a further ninety (90) days. This waiting period serves the purpose of allowing parties to change their mind before the divorce becomes final. If the Judgment of Divorce Nisi has issued but not become final yet, and you and your spouse decide you don't want to get divorced, then you can file a Motion to Dismiss and the Judgment will be undone. Although many of my clients who are getting divorced think the idea of getting back together with their ex sounds crazy, I have had cases where this happened. In addition to offering a grace period to change your mind, the Nisi period has three other legal effects: 1. The most obvious effect of the waiting period is that you cannot remarry during the Nisi period, be
72 comments
Read more

The Questions that Lawyers and Mediators aren't asking but should: Let's talk about Pronouns

By Skylark Law & Mediation, PC November 01, 2018
I recently had the opportunity to train with two of the most prominent mediators in Massachusetts: John Fiske and Diane Neumann . Each time they run a training, John and Diane share what they think is the most important question for a client to answer to have an effective mediation. John says that he thought the most important question is "What do I want?" But then he will tell you, with a knowing smile, that Diane disagreed with him and she would say that the most important question for a client to answer is "Who am I?" I agree with Diane. The best lawyers and mediators ask their clients not just about what they want, but also deep questions about the clients' identity, goals, and values in order to help the clients resolve conflict in the most effective way possible. Despite knowing this, we often fail to ask clients the simplest questions when we first meet them or have them fill out an intake. We fail to give them an opportunity to answer the question “W
2 comments
Read more

send us a message